December 2013: Brendan Higgins was recently a guest panelist on WCNY's weekly Financial Fitness. Financial Fitness is a live weekly program designed to help people make the most of their money. Click on the link below to watch the one hour Q&A where Brendan and two other insurance experts discuss practical risk management and personal insurance issues.

November 2012: MacIlvennie & Brown Insurance Agency has retained its status as part of an elite group of independent insurance agencies around the United States participating in the Independent Insurance Agents & Brokers of America (IIABA or the Big “I”) “Best Practices” Study Group. Each year since 1993, IIABA and Reagan Consulting, an Atlanta-based management consulting firm, join forces to study the country’s leading insurance agencies in six revenue categories. The agencies comprising the study groups are selected every third year through a comprehensive nomination and qualifying process and awarded a “Best Practices Agency” designation. The selected “Best Practices” agencies retain their status during the three-year cycle by submitting extensive financial and operational data for review each year. This year concludes the current three-year study cycle in which more than 1,200 independent agencies throughout the U.S. were nominated to participate. Only 224 agencies qualified for the honor. MacIlvennie & Brown Insurance Agency and Thousand Islands Agency were founded in 1947 and maintain insurance offices in Adams, Clayton and Cape Vincent, New York. 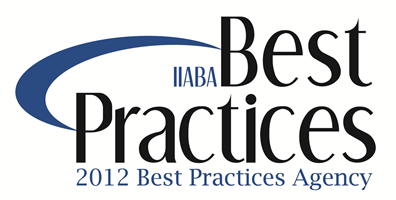 Brendan Higgins helps the Gunn Family in Oswego save money and improve their personal insurance program as part of Elisabeth Leamy’s Savings Makeover.

February 2009: During the inaugural Capital Event at the Crowne Plaza Albany-City Center, the Independent Insurance Agents & Brokers of New York, Inc., recognized Jessica Towles as the winner of the 2009 Accredited Customer Service Representative of the Year Award. The ACSR designation honors the professionalism and tremendous contributions made by customer service personnel to the success of an independent agency. Jessica has been with MacIlvennie & Brown Insurance Agency in Adams, New York since 1999.

June 2008 - MacIlvennie & Brown Insurance Agency was selected as the inaugural winner of National Underwriter's Technology Award. The award is given each year to one agency in the country who has best leveraged technology in their insurance agency to sustain profitable growth. Click Here to read a full copy of the article about this award.

Information you need, when and where you need it most. More »

Check out our mobile site at m.mac-brown.com

Provide extra protection for you and your family

We represent these fine companies

Jump to navigation Click her for our Customer Portal